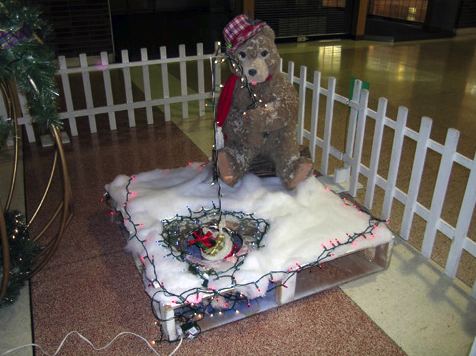 I received an email from a friend I’ve known since third grade telling me that they are going to demolish the mall nearest my childhood home in lovely Aurora, Colorado – the Buckingham Square Mall. Buckingham Square, opened in 1971, was always kind of a “sad”mall – you know, the type that just is never as fancy and flashy as the newer malls.  But, it was our mall.  And it was where my parents took me each year to see the Christmas decorations and Santa.  (Turns out that they were using the exact same decorations now – see picture above.  Yes, that was my Christmas magic as a child.  Not exactly Marshall Fields on State Street…)
I worked in this mall all through high school at the Original Great American Chocolate Chip Cookie Company.  I bought clothes at Stage (a subsidary of Fashion Bar), I ate at Round the Corner and Orange Julius.  I bought records and tapes at Musicland.  At work I watched the 20-something guys of Aurora buy sweet clothes at Chess Club and the old people dine at Wag’s – located inside the Walgreens. I watched the women of Aurora get free makeovers at Merle Norman and buy wigs made by Barbara Mandrell at the Wig Shoppe next door.  I bartered free cookies for free movie tickets and watched Pee Wee’s Big Adventure in the Buckingham Square Mall Theater at least 20 times.
This mall had character because it never changed once since 1971.  No remodel, no upgrade – it remained exactly the same from the day it opened to the day it closed. It was ugly, outdated, and frankly smelled of desperation when I worked there in the mid-80s, but dammit, it was ours!
Turns out I am not the only one who felt a little nostalgic about the place.  Soon after I received the first email about the mall demolition, another friend sent me the link to a guy who went into the deserted mall and took some interesting pictures and made a YouTube tribute to the old gal.  (See below for the movie.)
Anyway, farewell Buckingham Square Mall and all your memories.  Enjoy your new life as a mixed-use megaplex, full of contrived charm and generic mega stores.  (We really do need more Panera Breads and Home Depots, don’t we?)